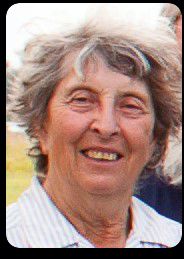 September 10, 2020, Charlene (Charlie) Perry won her battleon Earth and found peace.  She took a lot of history with her!

Charlene was born to Linney and Mary (Sikora) Perry on July31, 1938. She grew up in the Monarch, WY /Acme, WY area, spending a lot of time at her grandparent’s homestead in Decker, Montana.

She moved to the family homestead in the late 60's or early70's and lived off grid into late 1900's to early 2000's. She lived a private life enjoyed with her dog (Border Collie, Peggy Sue) and cats and many ranchanimals, including her horse Reno:  she took great pride in the leopard appy that was born on the family homestead to her prized mare, Kelly. She took great pride in her stock. She started with a few dairy cross cows and bred them up to be a fine herd of red angus. Each cow that she bred and owned had a name:  she could tell you who was who from afar.

Charlene was an accomplished artist and gifted family and friends with pieces of her work. She would sign off with as caricature on cards she sent out with a small personal message. She was also gifted with the power of written word, and often contributed many articles in the opinion page of the Sheridan Press.  She authored a book that unfortunately was never published, but in it she shared a lot of local history and had started working on a second book.

Charlene will always be known for her pioneer spirit and ability to accept simplicity as perfection. She was a no-nonsense gal and was proud of the fact she made it on her own. She endured many challenges,suffering a stroke in the early years of 2000 that she completely recovered from.

Charlene had people in her corner we want to thank who helped her out when the chips were down. It was because of those friends she was able to make trips around the sun that most people would have never dreamed she would be able to make. To all those folks who so graciously stepped in when she needed a hand during tough times, a huge thank you from her family!

Private services will be conducted at this time and will be followed by a celebration of life possibly in the Spring. In lieu of flowers donations can be made to the Dog and Cat Shelter in Sheridan, Second Chance Rescue, or Ducks Unlimited (on line or 1-800-453-8257) in honor of Minnie, an injured wild duck she adopted.